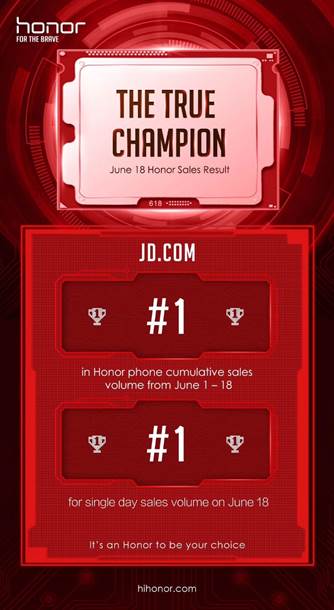 [Hong Kong, June 22, 2018] Honor, a trendy, young and innovative smartphone brand, is crowned dual-champion during JD’s 618 Shopping Festival, one of the biggest country-wide online sales event in China. Honor achieved the highest cumulative sales volume over the period of the festival and is ranked first in terms of daily sales volume on June 18 in the smartphone category.

Honor has grown in an unthinkable speed globally. Globally present in over 74 countries, Honor expects to achieve over 150% growth in overseas market. In India, one of the fastest-growing market, Honor ranked number 5 in terms of market share. In Russia, according to data released by Growth from Knowledge (GfK), Honor has been the top 3 smartphone brand in sales volumes for 12 consecutive months and have gained over 10% market share since February this year.

This year, the smartphone giant’s latest flagship AI-powered handset, the Honor 10, has recorded a sales volume at over 1 million, after a short one month of its China initial launch in April and one week after the London global launch in May. The overseas sales volume of the Honor 10 has exceeded 100,000 within the first month, which broke the sales record of the flagship smart phones. This record-breaking sales figure has been achieved in markets specific where Honor 10 is immediately available for purchase following the global launch on May 15. In the UK, Honor 10 has become the newly launched Bestseller on Amazon UK in the unlocked Phone category. On hihonor.com, Honor’s official website, all the pre-prepared stock was sold out in the first week after the launch in every single one of the five countries where it is available, including UK, France, Germany, Italy and Spain.

In China, its home market, Honor continues to occupy first place among smartphone e-brands in terms of revenue and sales volume. Honor has constantly scored big in China’s largest online shopping festivals. In another major online shopping festival, the Singles’ Day, on November 11 last year, Honor has generated over RMB 4.02 billion in revenue on Jingdong (JD.com) and Alibaba (Tmall.com).

ABOUT US
We bring to you all the hottest & latest technology news, gadget reviews, unveilings, rumours from India and around the world—in a fair, unbiased way. www.thetechlove.com
Contact us: Pardeep@TheTechLove.com
FOLLOW US
© 2023, Mastermind Corporation.
%d bloggers like this: