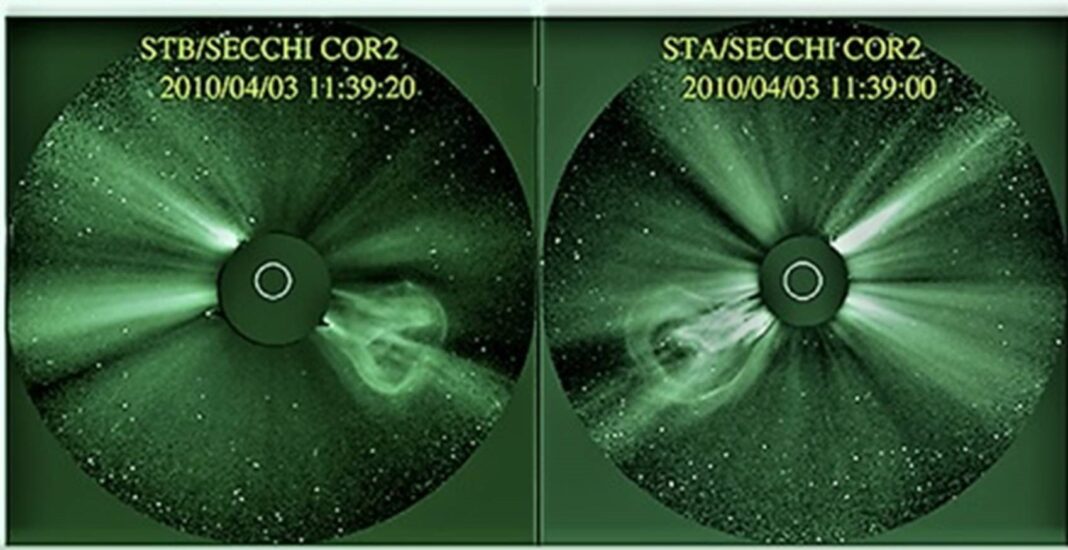 New Delhi, Dec 15: Understanding of Coronal Mass Ejections (CMEs), which are episodic expulsion of huge magnetized plasma from the Sun out into space, is important since they cause major perturbations in the Earth’s magnetosphere.

They affect the near-Earth space environment disturbing the orbit of satellites in low-earth orbits, Global Positioning Signals (GPS), long-distance radio communications, and power grids. CMEs are closely related to solar activities such as sunspots and solar flares. The solar activities are known to vary in 11-year periodic cycles. It had earlier been found that Solar Cycle 24, which covered the period from 2008 to 2019, was weaker than Solar Cycle 23 (1996-2007), and that the solar activity was weakest in 2019 over the last 100 years.

Since CMEs and other events propagate in interplanetary space, astronomers expected that the weakening of the solar cycle 24 will be reflected in the different properties of the CMEs as well. They looked at the radial extent of the CMEs when they reach the Earth, over both cycles 23 and 24.

A study by a team of scientists led by Dr. Wageesh Mishra of the Indian Institute of Astrophysics (IIA), Bengaluru, an autonomous institute of the Department of Science & Technology, Government of India, has brought out some interesting insights.

Figure: A CME having a loop-like structure observed on 03 April 2010 by coronagraphs onboard NASA’s STEREO-B (left) and STEREO-A (right) is shown.

It has shown that the average radial size of CMEs during solar cycle 24 was only two-thirds of that during the previous cycle. This was baffling as along with the weakened solar activity, there was a significant decrease in the mass, size, and internal pressure of the CMEs, and it was expected that they would have large radial size.

Dr. Mishra suggested that the reduced pressure in the interplanetary space in cycle 24 is perhaps compensated by a reduced magnetic content inside CMEs, which did not allow them to expand enough in the later phase of their propagation. The explanation is strengthened by a finding that the lack of stronger and bigger CMEs arriving at the Earth during solar cycle 24 had caused reduced geomagnetic perturbations compared to cycle 23.

A report on the findings has been published in the journal Frontiers in Astronomy and Space Sciences. The research paper is co-authored by Prof. Nandita Srivastava from Physical Research Laboratory, Udaipur, and Urmi Doshi from the M. S. University of Baroda, Vadodara, India.

In this research, the team studied the Earth-directed CMEs and interplanetary counterparts of CMEs (ICMEs) using publicly available observations from Solar and Heliospheric Observatory (SOHO) and Advanced Composition Explorer (ACE) launched by NASA in 1995 and 1997, respectively.

Noting that the expansion history of CMEs which is governed primarily by the difference in the total pressure between the CMEs and the ambient space around them is difficult to understand, the scientists said that CMEs need to be observed at different distances from the Sun to better understand the evolution of their radial sizes and expansion behaviour. Such a study would be possible using observations from several space missions such as Aditya-L1 to be launched in the coming year by ISRO, India, as well as the Parker Solar Probe launched by NASA, and Solar Orbiter launched by ESA, they added.

Mi biggest sale of the year price drop of all product