New Delhi, April 13, 2018: It’s good news for all Indian MOBA (multiplayer online battle arena) gamers, enthusiasts and fans. One of the most popular and addictive MOBAs ‘Arena of Valor’ by Tencent Games, the world’s largest gaming company, is now available on bothAndroid and iOS platforms. Arena of Valor is a multiplayer online battle arena, a video game subgenre that has boomed in popularity due to the industry’s growing esports scene. Ranked as the No. 1 game in Taiwan, Thailand and Vietnam for 3 consecutive months, Arena of Valor has released in more than 30 countries and now has more than 10M Daily Active Users.

Arena of Valor released in Google Play Store India on March 1, 2018 and became an instant hit with thousands of players downloading and playing the game. The demand for games in India is on an upward curve and Tencent has started India operations to provide high quality games to the players here. 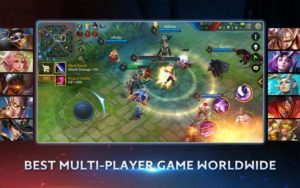 “Indiahas a big part to play in the future of esports, given the demographic advantage the country holds. Arena of Valor has taken the Indian mobile gaming scene by storm with player community pages set up specifically for Indian players. The customized package size suits all types of smartphones and creates the perfect MOBA experience on the mobile platform.In order to improve the user experience Tencent Games has placed the game servers in India.Given the increasing popularity of the game, we’re looking to conduct local esports tournaments for Arena of Valor in India.” addedAneeshAravind, General Manager – AoV India

Since launching in China in 2015, the game has experienced immense growth. Arena of Valor now boasts more than 200 million monthly active players, making it one of the most popular mobile games in the world.

Each game is a five-on-five battle, where players team up to control fantastical heroes and carve their way through jungles, lanes, and towers, draw first blood and destroy the enemy Core. Players can now create and command the most dominating team the MOBA world has ever seen with a roster of over 40 fearless Heroes including a variety of tanks, mages, warriors, marksmen, and more. Arena of Valor, is all about skill and an opportunity to turn the tide of battle and vie for glory no matter the odds. Win or lose, every action counts!

Top 5 Apps which students should consider to deal with exam...

Top 3 MOBA Games in India: The Genre That Keeps on...

Some interesting technology updates and trending mobile applications – What else...